Home › Gibraltar › Guest Post by Team Blue Dolphin: “You do not cross the Strait of Gibraltar. The Strait allows you to cross it.”

Guest Post by Team Blue Dolphin: “You do not cross the Strait of Gibraltar. The Strait allows you to cross it.”

Our friends from Team Blue Dolphin had a target date of crossing the Strait of Gibraltar on Monday, July 1. Unfortunately, due to bad weather in the Strait, they had to return to Barcelona without being able to enter the water. We greatly appreciate Santi Callis for sharing with us their experience and wish that they soon return to the Strait and that when they do, the weather and conditions allow them to cross.

After many months of training, waking up early in the morning to get into the water, counting endless laps, getting in the ocean even in the winter months, falling asleep in the early afternoon because of training exhaustion, realizing that you could sweat more underwater than in a marathon… after more than 180 days of getting our days used to a sustained and prolonged effort in the water, we arrived in Tarifa.  Our dream is one common goal: to swim across the Strait of Gibraltar.

A mixture of excitement, anxiety and nerves were mixed with the desire to jump into the water as soon as possible.  Five days passed without swimming and it felt like we need to release all the energy we accumulated through this imposed break.  For the past four months, we haven’t let so many days in a row go without swimming.  That fact, together with an incessant diet of pure carbohydrates, was making it very difficult to relax. We needed to get the green light.

Managing that uneasy feeling is the hardest part. Everything you do, you’re reminded of why you came here: To swim to Africa.

This is where you have to try to detach yourself, to relax your body and your mind, and to think about every single day that was needed to get you where you are today and to convince yourself that you are ready.

The Strait of Gibraltar has some of the most unpredictable weather conditions.  It´s where two seas meet; it’s very strong winds makes Tarifa the capital of kitesurfing and windsurfing.

To prepare for the swim, we participated in several open-water competitions: Marnaton, Radikal, Race Tuna, Begur, Mallorca Extreme, etc… but none of them are close to The Strait of Gibraltar.

The uniqueness of the Strait was revealed in our first briefing. For the previous two weeks, there had been a strong Levante wind (the worst wind for swimmers), it’s prevented even the big ferries to go across the Strait.

What’s great news for windsurfers was a nightmare for us. Our concern increased as the forecast failed to improve.  We had never been so attentive to all kinds of wind-related sites and apps; WindGuru had become our virtual best friend.

The forecast (and the local fishermen) suggested that we might get an opening in two days.  We were becoming increasingly optimistic.  At the same time, we were restless and had trouble sleeping and digesting plate after plate of pasta. We drank water incessantly.

The day before D-Day, we had to abort our mission.  The conditions simply weren’t improving.  We were depressed but tried to encourage each other. We were tense and anxious.  We began to ask ourselves the fateful question that we didn’t not want to ask aloud:  What if we cannot cross?

We called Mauricio Prieto, who was supposed to arrive on Thursday as part of the group to cross on the second week of July. We shared with him our experiences and told him that from Thursday on, the wind is supposed to get even stronger.

Suddenly we got a call- we thought maybe it’s our last chance! We went in for another briefing.  It seemed like this was the real thing!  In the briefing, we were excited and hopeful.  We listened attentively to every word and were scheduled to meet at the harbor the next day at 7am.  We prepared all the material, all the food and drinks, and went to bed.   We woke up and had breakfast (or rather, 250 grams of spaghetti and half a liter of isotonic).  It was 6:30am and still dark.  The cell phone rang and we are told that the conditions had turned against us. Mission aborted- again.  It was hard to control the sense of frustration. All this effort for nothing.

We know you can’t beat the sea. It makes us very aware of that saying that at first did not have much meaning for us: “You do not cross the Strait of Gibraltar.  The Strait allows you to cross it”.  And yes, for now, the Strait did not let us cross it.

We decided to leave: waiting around for conditions to improve was not worth it.  We will try again in the near future.  Interestingly, our first feeling of frustration was replaced by a feeling of not giving up.  We will keep on training.  We will continue to swim and to enjoy this wonderful sport. And we’ll be back to swim across the Strait of Gibraltar and touch Africa.

–Santi Callis (in the red cap)

PS. Today they swam 20 kilometers near the border of France in a little over 6 hours! And in 3 weeks they plan to swim from Menorca to Mallorca. Go, men- go! 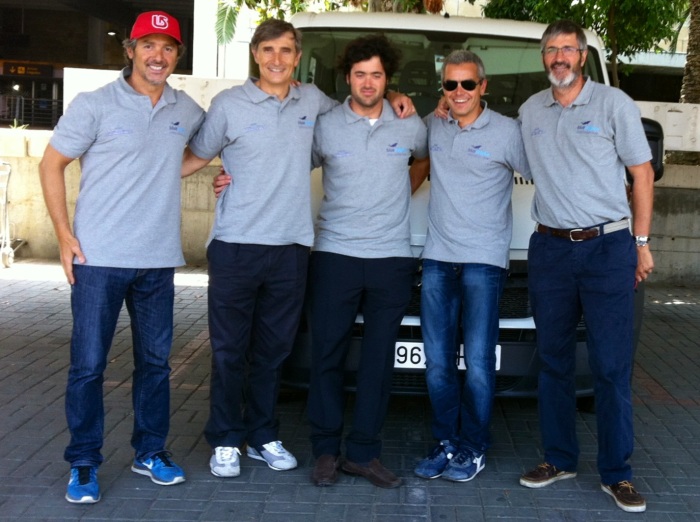