I haven’t posted in a long time–there’s been lots of ups and downs, so I’ll try to be concise. Last time I wrote, I was nervous about surgery, a double mastectomy with level 1 and 2 lymph node removal in my left armpit.  I ain’t going to lie–I was right to be. The surgery initially went off without a hitch and we went home the next day. I have no recollection of any of it, except that I remember asking the nurses if I could just pee in bed since there was no way I could make it to the bathroom. (They made me get up, thankfully.) And I remember complaining to Mauricio the entire ride home about how unfairly pot-holed San Francisco’s streets are. The pain made any extra bump feel like I was being knifed.  They had me on a pain- management program (drugs) that barely kept me afloat from otherwise intolerable pain.  That lasted a solid six weeks before morphing into a more bearable pain.

Those drugs, while lifesaving, scare me in how fuzzy they render your brain. A couple of days after being home, I evidently texted my friend Amanda: “I think I’m in the hospital. Pain is still here and in totally hirizintill…”  The crazy thing about sending text messages is that when your friend reminds you about it later, you’ve got the embarrassing evidence right there on your own phone.

Two weeks later, I had complications and needed more surgery.  My left armpit suddenly swelled up like I was hiding a football where my lymph nodes used to be. This meant they had to insert a third drain- in my armpit. The other two drains sticking out of my sides felt trivial compared to the armpit drain- that sucker was mean.  A day later, I ballooned up on my right side due to unanticipated internal bleeding. My friend Carrington was visiting from NYC, thinking we could gab about life curled up in bed as I convalesced, but we had to rush to ER for a hematoma evacuation- meaning they basically had to re-do the surgery.  The pain went back to square one.

If those were some of the “downs,” here’s the uber “up” of 2015 that makes me want to kiss everyone around me with gratitude. Three days after surgery Dr. Moasser sent me this e-mail: “Your pathology is back. There is no cancer remaining in the left breast and all the lymph nodes are also negative. They see the scarring that indicates that cancer cells have died here, including scarring in the lymph nodes. But there are no cancer cells remaining. So it’s now confirmed by the microscope. You’ve achieved what’s called a “complete pathologic response” to chemotherapy. There is very strong clinical data from many sources with years of follow-up that shows that patients who get this result have a very good long term prognosis. This is super fantastic!  I’m so happy for you.”

So, as of March 16th, I am technically “cancer-free” and that fearful fog I’ve been living under for 9 months lifted a bit. Mauricio printed out the e-mail, read it aloud to my family (mom and dad were there) while popping open a bottle of Dom.  It’s the best news I could get at this point.  I am not done with treatment though; I have to clear the radiation hurdle.  You might wonder why I still need radiation if the pathology was good.  The thing is stage 3 triple negative breast cancer is bad– and while chemo seemed to have done its job, there might be cancerous cells still lingering, so we’re mopping up around the area.  Radiation is 5 days a week for 5 weeks—I’ve done 8 out of 25.  Radiation shouldn’t be too hard except that I’m coming into it after the double clobbering from chemo and surgery. For example, it hurts to lift my arms above 90 degrees making radiation tough since I need to hold my arm over my head for 45 minutes every day.  And my body’s still recovering from the chemo. It’s been four months since my last treatment and my white and red cell counts are at the lowest level they would allow anyone to receive radiation.  Can I say it?  I’m TIRED of this and would like to begin healing.

A couple of weeks ago, I got in the pool and that was a big moment.  My kids were there encouraging me which was touching and oddly humbling at the same time.  I’ve dreamt about swimming for the last 8 encarcerated months and shed tears into my goggles for the first couple of laps.  Let me be clear though: I’m not swimming like old- Susan, more like a futuristic 80-year-old version of myself, but it’s helping immensely to improve the range of motion in my arms and lower the chances of developing lymphedema (arm swelling).  The first day I managed 10 laps, rather pathetically. Even so, I promised myself to never swim less than the day before.  Now I’m up to 40.  My goal is to swim the 2K with friends at my favorite open water swim- Marnaton Cadaqués in September.  As I swim, my thoughts wander and I realize that I was in basic survival mode during chemo and surgeries- just dealing with the daily challenges I needed to overcome. With the toughest part behind me and the great pathology report in hand, my mind is beginning to take toll of everything that has happened. Sometimes I wonder what is left of me after the cancer wreckage. I need to deal with the psychological cancer aftermath and that feels arduous.

My family and I are enormously grateful to my oncologist, Dr. Mark Moasser at USCF, for everything he did to get me to a cancer-free point after a very scary diagnosis.  Honestly, he pulled me through chemo when I didn’t think I had anything left.  In addition to his attention to detail on a patient level, he’s doing brilliant research on how to get us closer to a cure.  Our family is setting out to raise $20,000 to help fund Dr. Moasser’s research at his UCSF lab. Sofia kicked it off by asking for donations in lieu of gifts for her 13th birthday and got us 25% of the way there.  Soon we hope to announce some swimming-related initiatives.  A huge thanks to all who’ve donated so far!  And if you want to help out: click here.

Stayed like this for about six weeks. Pain sucks! 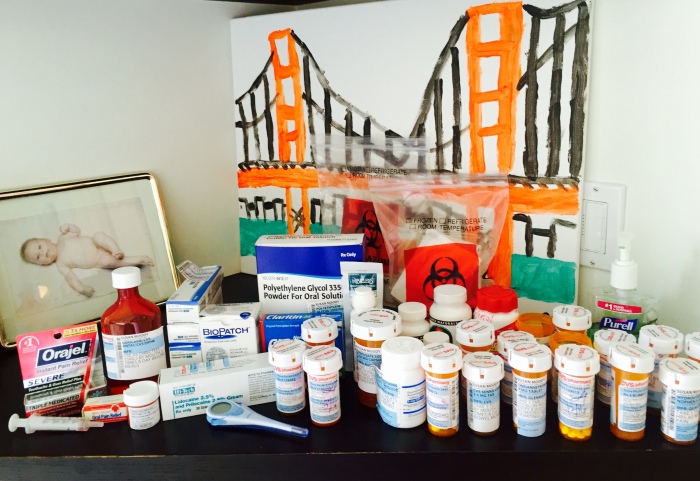 It’s kinda scary to see what it takes to get through chemo and surgery. My girls spent Spring Break with their cousins in Mexico. Sofia sent me a photo of Carolina and her in speedos bumping around in the back of a pick-up truck knowing this would offend her mother’s sensibility. I have to love her sense of humor. 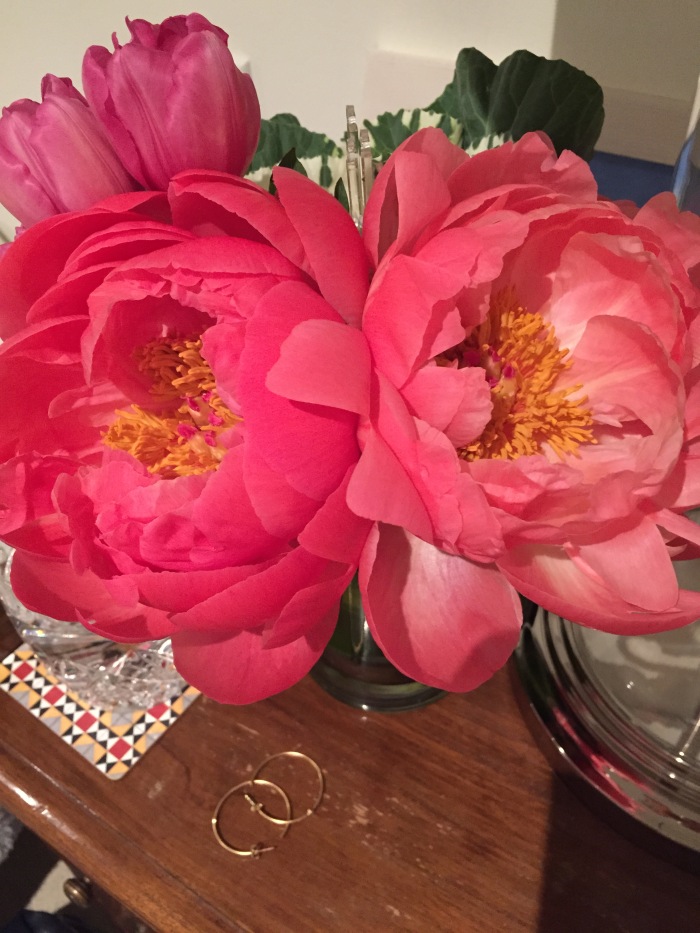 So thankful to all my friends who’ve helped me through this storm- you know who you are! I couldn’t have done it without you. 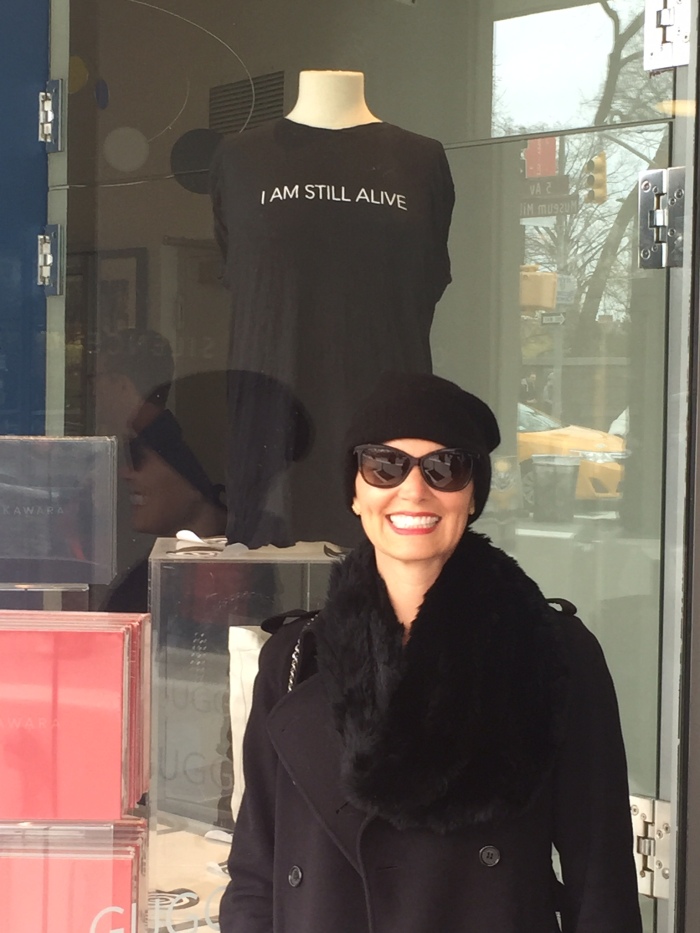 I think I need this tee.