If I don’t swim, I have nothing to blog about. Three months after my last entry (post Alcatraz), endless drafts about nothing have been written and tossed until now.

Last Saturday (Oct 12, 2013 ) Mau and I participated in the Travesia la Bocaina 2013 organized by the Club Vulcano from Lanzarote to Fuerteventura, Canary Islands. The straight line distance between Lanzarote and Fuerteventura is 15 km but the swim ended up being 17.5 km. 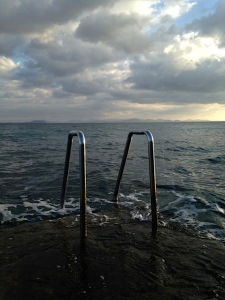 View of channel between Lanzarote and Fuerteventura

Each of the 100 swimmers had to choose a  group: Fast, Medium or Slow.  Even as unprepared as I felt I was for this event, I expected to able to hold the pace and finish with the medium group, albeit at my physical and mental limits.

A pre-event briefing is vital for the participants because it gives us a plan of what the race should look like and how it should unfold.  The briefing should also explain any back up plans, all safety plans and the worse case scenarios.  The briefing for this swim took about 1 hour despite the fact that the amount of useful information could have been summed up in 2.5 minutes.  The take aways were the following;

Briefing Point #1: Each group has a kayak that will set the pace.  If a swimmer paces faster than the kayak, she is at risk of being pulled out.  The group must swim together.  If the weather conditions are good, the organization will open free swimming 2 km before the finish.

This is a fair point to start with but the fact is that a swim is never executed as one expects and after 12 years of running this event, it was surprising how early things started falling apart in the water.

Even before the first stop, the medium group had already split into two groups, one that could follow the kayak and one that was 5 minutes behind.  No one from behind got pulled out however, so the kayak stopped every 20-25 minutes to let the others catch up.  For most of us in the front, this was a nightmare; once we were getting into a rhythm, we were having to stop and tread water while the currents set us off course.  When the second half of the group caught up, we had to swim back through the currents to get on course again. It was like crossing a channel in a zig zag.

The infrequency of the refueling had me a bit worried so at each stop I ate more than my normal intake. At the first stop there were so many boats with food, gels, salts and water that it felt like the floating markets in Thailand.  We relaxed and laughed as we did a “bar crawl” style feeding from boat to boat.  2 hours and 50 minutes into the race, we had our second refueling and the third refueling took place at almost 4 hours.  After that, apparently I was free to swim on my own.  There was not a formal stop but sometime in the last two hours I swam up to a boat, shoved a gel into my wetsuit. I actually didn’t open the gel at the time because I wanted to have it just in case.  I had been swimming unaccompanied and unguided, I was way off course and it was taking me forever to get back on track. I imagined I would be stranded in the water and hoped that saving the gel would save me.

While the infrequency of the feedings and the “free unguided swim” in heavy currents certainly pushed my toughness to a new level, I can’t help to wonder how on earth they don’t lose people in the event?

Briefing point #3: We must be cautious about swimming too far to the right because we will get into the path of the ferries and if that happens, the ferry has the right of way.  This should not happen though because they will correct our path in anticipation.

Around my fourth hour of swimming I realized that I was on the wrong side of the ferry terminal.  With much pain in my shoulders and little energy to push on, I kept swimming against currents and waves. I asked a man on a boat if I needed to worry about the ferries and he said “Ya los ferries no vienen” – the ferries don’t come anymore.  Can you blame me if in my exhausted and slightly delusional state, with a giant ferry sitting in the port and no one around to help me I simply didn’t believe him?  I tried to swim with my head above the water but I simply didn’t have the strength to continue that way, so I put my head in and pushed forward, until I crossed the ferry and saw the most beautiful sight of the day; The giant yellow buoy that would guide me to the beach.

Briefing Point #4: It was going to be “un día cojonudo” – A day with awesome swim conditions.

This of course, never happens. When we left at sunrise the water was placid.  That, however, lasted for about an hour, then 3-meter waves tossed us around with winds and currents picking up we were pushed us right of our course.

In the Strait of Gibraltar we had one boat reading real-time currents and conditions in order to guide us in the most efficient route. In this event however, we were to follow kayak “volunteers” who presumably didn’t know how to read the water and conditions as marine professionals.  If they had the same briefing that we had, there was nothing mentioned about currents and winds.  Kayaks (and most surface vessels) actually have a wind drift rate superior to swimmers which would explain why so many people following kayaks got so far off course.

Frustrated by the inefficiency of my crossing, I asked a marine signaling material expert if it were possible to create a better “guide” across the strait. His solution is pasted below:

“You can’t go and drop a buoy every 300m over a channel not only is it impractical but also inconvenient for other water craft.  Close to shore it makes sense as you not only steer swimmers but also create an exclusion zone for boats.

I think it would be more reasonable to have a really good marker at larger intervals.

One solution is to have x yachts with huge flags (10m2) flying from the mast holding position +/- 100m in the channel, along the route.  If no wind they can motor in circles to make the flag fly or put sails up.

A similar solution would be to hire some small zeppelins (or very large balloons) and tie them onto power boats.    Under certain conditions these small zeppelins could also be anchored directly to the bottom of the sea.  If a boat is used it should use its GPS to maintain position, in very deep water using power or in shallow water anchor.  For the kayak I’d suggest preparing a GPS device with lots of target waypoints on a single line.  If you are rowing towards a single target 10NM away a cross track error of 500m may seem irrelevant however if you have a waypoint every 500m I doubt the cross track error will grow above 50m.”

Maybe next time we could get a better guide through the channel?

Briefing Point #5: The doctor supervising the race told us that the latest trends suggest that a big plate of pasta is not the best source of energy pre-event as the latest research suggests that the best carbohydrates come from vegetables. But he said, we didn’t need to worry, we could eat anything we wanted because we would “burn” everything during the race.

I am not sure this was useful information in the briefing but it stuck out in mind that we would be worried about weight gain right before a death-defining 18km ocean crossing.

Briefing Point #6: Marine Life; there was no mention of marine life in the briefing.

While there was a dearth of marine life during the swim, we swam through numerous jelly fish blooms.  I only had my face, hands and feet exposed and got stung maybe 15 times. Towards the end of the race I actually began to look forward to the stings at it felt like shock treatment on my slowing dying body. It awakened the senses in my arms and hey, they kept me company. I now consider jellyfish my friends.

In the end, of the 100 participants, 32 quit sometime during the race. Those of us who had swum the Strait of Gibraltar coincided that this was a significantly more difficult swim.  Because of the tough conditions, the crossing of La Bocaina channel took around 6 hours. Guillermo Verdejo won (4th consecutive win) with a time of 4 hours 45 minutes, compared with 3 hours 39 minutes last year. Strange as it may sound, despite the difficulty and disorganization of the event, I thoroughly enjoyed the challenge and have discovered that I really love to swim.  These swims liberate me as they help reduce fears of the Open Water.

With our friends Christian and Laia. We arrived almost 6 hours after departing.