Our friend Mark was elemental for us during the swim. His account made us crack up- thinking about how many things he was juggling all at once (especially the phone calls). Just see for yourself!

On the boat, the first priority for me was my friends’ safety and getting them fed every 45 minutes – in other words, to maintain their physical health. Secondly, I wanted to keep their mental state strong, upbeat, and focused: to cheer them on loudly, to strengthen them with my presence and to give them supportive messages.  And lastly, I wanted to document the crossing for them, to try to take some decent photos and send informative updates for family, friends and followers. Sounds easy enough, right?

From the time when I had signed up for Swim4Good duty a few months ago, my biggest fear was becoming seasick on the boat.  After all, our Zodiac would be small and would get tossed around…and people from Illinois are not known for being particularly seaworthy. So to test this, while we were driving on the curvy roads to Cadiz one day, I popped a Dramamine and attempted to read Emily’s long blogpost from my phone in the backseat of the car. Thankfully I passed the test: didn’t get sick and didn’t fall asleep. But would this be enough?

Then the day came: we were on! During the crossing I wrongly assumed there would be time to do more. From the minute we departed, to the moment we returned from Morocco 5 hrs later, I didn’t have 5 seconds free. While I was preparing the next water bottles for the swimmers, and also struggling to channel Ansel Adams with both camera #1 and phone #1,  phone #2 was buzzing with messages from the five different Whatsapp groups, demanding more pics & info. A “GO TEAM!” cheer here; a #swim4good Twitter posting there. “Feeding whistle will blow in 5 minutes”, said the captain. Stopping already? I still needed to write encouraging messages for km 6, 7 & 8!  With my left hand I was thanking Swim4Good donors on Facebook; my right hand was shoving peeled bananas into plastic bags. Didn’t even have time for a bathroom break – with the adrenaline pumping and the tasks mounting, I just didn’t need to go. 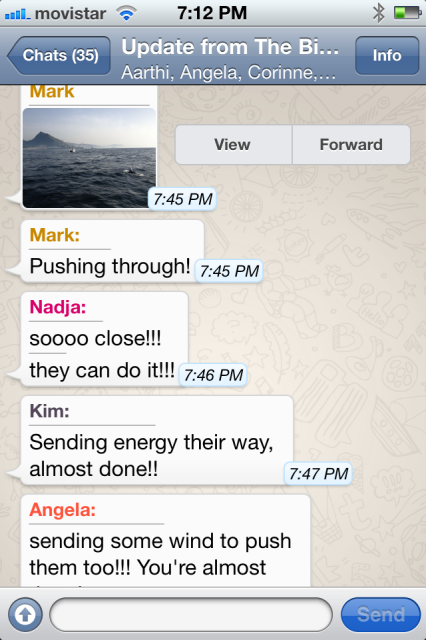 Although I did OK as bartender and cheerleader, one of the roles for which I was not really prepared was that of telephone receptionist. The swimmers were actually receiving phone calls on their mobile phones! Wasn’t expecting to have to take calls. Surely they were all from amigos just sending their support, but what if the call was from a telemarketer? “Hola! So sorry, but Mauro’s busy swimming from Europe to Africa right now. Can you, like, call back in 5 hours?” Unfortunately I did not have time to chat, so they received the impolite hang-up. Honestly speaking, there were many wonderfully supportive messages coming in from all over – from brothers, sisters, friends, workmates, famous swimmers, complete strangers – via email, sms, Whatsapp, Twitter, Facebook. From America to Zambia. Swim4Good would have had to cross the Strait and back – twice – to give me enough time to relay all of the messages that they had received.

My regrets: I would love to have written more inspirational messages on the whiteboard, and I wish that I could have written each person’s message to the swimmers. First of all, I couldn’t find the marker – it had been left behind in the big boat Ugh. Then at km5 when I could actually start writing messages, everything in the front of the Zodiac was becoming soaked.  Including myself. The poor board couldn’t handle the constant spray and splashes of saltwater. And the swimmers couldn’t see the written messages well anyway. So I just did more cheering.

Apart from these missed messages, I also regret not being able to snap photos of all of the different “friends” from the sea that we had witnessed. They moved quickly and unpredictably. The enormous leaping tunas were for me the most surprising sighting. And the encounter with the huge whale added the additional challenge of having to do an Internet search, in the middle of the Strait, to be able to spell “Rorqual” correctly. 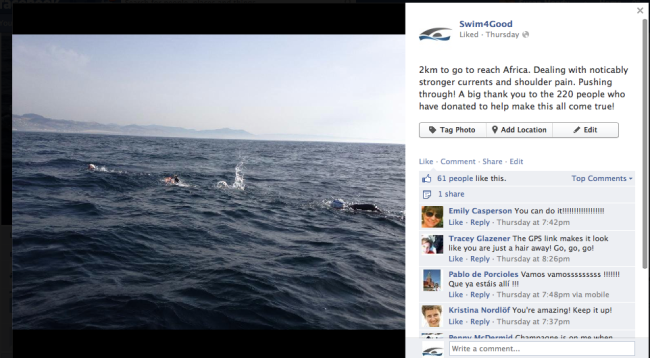 I would also have loved to interact more with everyone who was sending their support. Every time that I had the chance to peek at Facebook, I couldn’t believe the enormous reaction they were receiving!  In the last hour, however, we were all too busy cheering them through the tough currents. In the stress of the last few kms I was erroneously trying to tag photos on Twitter, and I put #hashtags in Whatsapp postings. Also I found out later that, while in my pocket, Mauro’s phone had inadvertently posted some nonsense characters to his thousands of followers on Twitter (gulp!)  Needless to say I won’t be changing careers to become Swim4Good’s  Communication Director anytime soon.

All in all, it was a once-in-a-lifetime experience – to be by my friends’ sides in their inspiring crossing of the Strait of Gibraltar.  It was an amazing accomplishment, all for a worthwhile cause, and it was done during this week of laughter, sweat and tears. It was a great honor. I would do it again with them – anytime, anywhere!
Took this video on my iPhone just before they suited up– sometimes to calm the nerves, you just gotta dance!

Like Loading...
‹ We Did It! Underwater accounts by Susan, Emily and Mauricio
New Swim4Good Caps – Giving 30 away ›